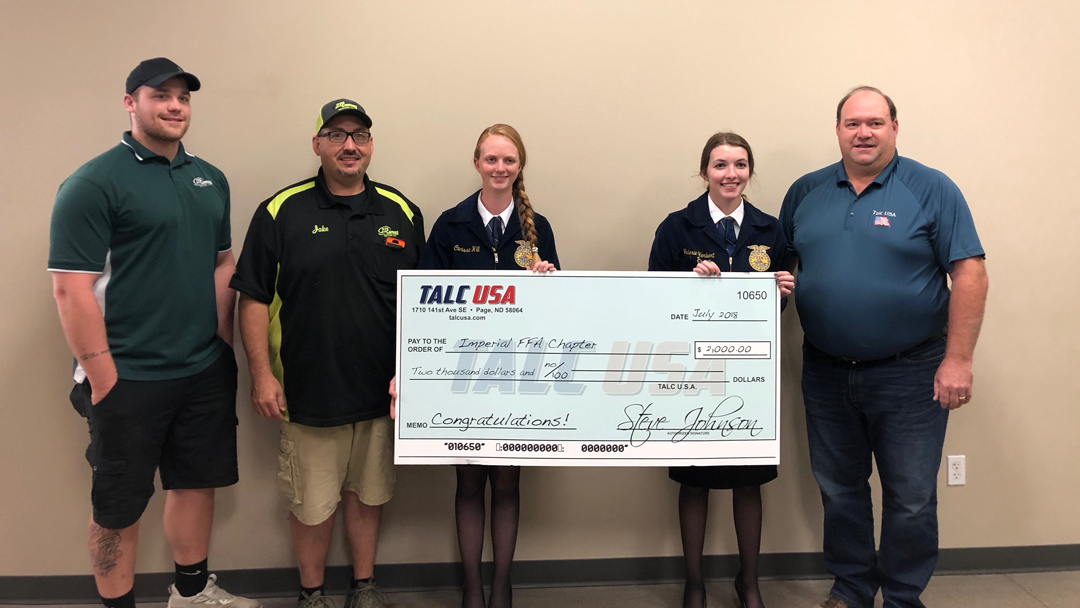 The Imperial Nebraska FFA chapter was awarded a $2,000 donation from Talc USA and 21st Century Equipment in Imperial NE.   The donation is part of the Talc USA’s Green Cup Promotion between a Talc USA dealer and the farmer that discovered the cup.

21st Century Equipment from Imperial NE, sold a pail of talc to Dirk Harberg from the Imperial area.  Inside the pail of talc was a green measuring cup engraved placard congratulating him on winning their Green Cup Promotion and instructing him to return the cup to the point of purchase to receive $500.00.  21st Century was awarded $2,000 to donate in their local community to an organization of their choice.  They choose to give the donation to their local FFA chapter at their local school that promotes Agriculture to students involved in the program.  Jason Speck one of the advisors for the FFA program said they would use the funds to send two teams to the National Convention. Grossenburg Implement out of Laurel, Nebraska is proud to award a cash donation to Laurel-Concord-Coleridge FFA and Allen Consolidated FFA,…

If you would like to learn more or have any questions about our business or product, simply click the button to the right to contact us. We're more than happy to get in touch to answer your questions!
Contact Talc U.S.A.
Copyright Talc U.S.A. 2015 - All Rights Reserved | Website created by BNG Design
Back To Top
×